I was always an avid reader. I couldn’t wait for garage sale season because I knew I could spend $10 and wind up with 40 books. I loved choosing stories in different genres, and developed a few favourite authors and series. These books kept me enthralled throughout my late childhood into my teen years!

The Goosebumps series has always been one of my favorites. I loved the paranormal, the afterlife, haunted houses, graveyards and anything else “spooky.” This series offers something for everyone and touches on every kind of monster or scary situation and uses both male and female characters as the protagonist. I began reading these books around age 8. There are older series also written by RL Stine for teen readers (Fear Street) and then there are also spinoff series.

I grew up with the Babysitter’s club. I found myself relating to the girls in different ways. I love reading about their adventures, their passions and their hardships. It was an inspirational series as well. It made me want to become a babysitter, and I wanted to design programming for children. Originally I believe this helped encourage my dream of working directly with children.

It follows the stories of 7 different girls and their families: Kristy, Claudia, Mary Anne, Dawn, Stacey, Mallory and Jessi. Each of these girls come from different cultural, economical and social backgrounds but they together form a club to help provide childcare to the children in their area.

This series barely needs an explanation. It is a classic series, and has developed quite the cult following. What I love about Harry Potter besides the magic and the suspense, is that despite it having darker undertones, the surface of the story appeals to both the younger and older followings.

Everyone can compare themselves to at least one of the characters within the story. The story follows a young boy named Harry Potter, who had believed himself to be a regular person, or muggle, for his entire life. He receives a letter on his 11th birthday that informs him that he is a wizard. The books follow his adventures at Hogwarts, a school for witchcraft and wizardry, as well as his battle with evil incarnate, also known as Lord Voldemort. Sometimes I wish I had never read series at all, so I could start over and relive the magic with a fresh outlook.

This series was recently adapted as a television series but I still enjoyed its charm before watching it come to life on the silver screen. The story follows a clumsy witch named Mildred Hobble, and her adventures at Cackles Academy of Magic. A lot of people pull similarities from Harry Potter and The Worst Witch, saying that Jill Murphy copied J.K. Rowling. In actuality, although this latest television adaptation was recently released, the first book “The Worst Witch” was published in 1974.

A Series of Unfortunate Events by Lemony Snickett 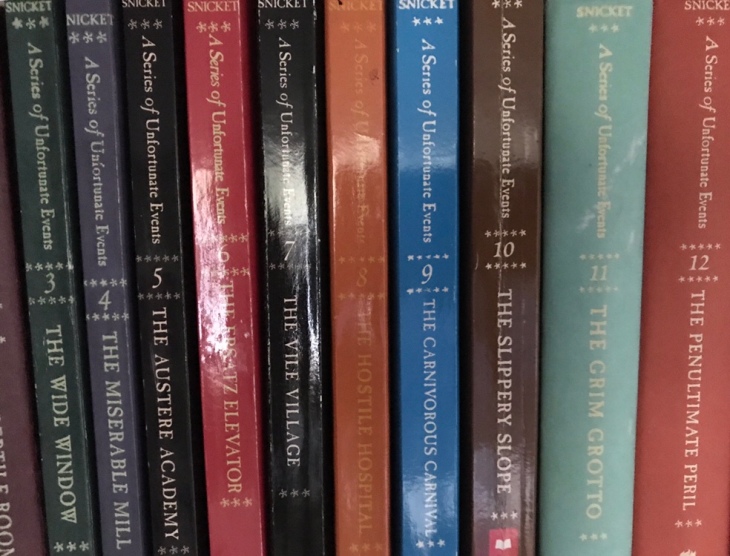 This series was hit and miss for me. I loved the first six books, but then I found it to be a bit repetitive. It follows the three Baudelaire orphans on their adventures with new guardians when their parents were presumed dead following a fire that engulfed their mansion.

The first guardian is a man named Count Olaf, and he is a terrible man who wants to steal the Baudelaire fortune for himself. He repeatedly presents himself as a disguised character, following the Baudelaire’s from guardian to guardian. This book series was recently turned into a Netflix series and they did the books justice!

I hope these recommendations help you find a new adventure for the 8-12 year olds in your life! I will continue this mini series with series recommendations for babies and toddlers, preschoolers and school age children, as well as series for teenagers and adults.