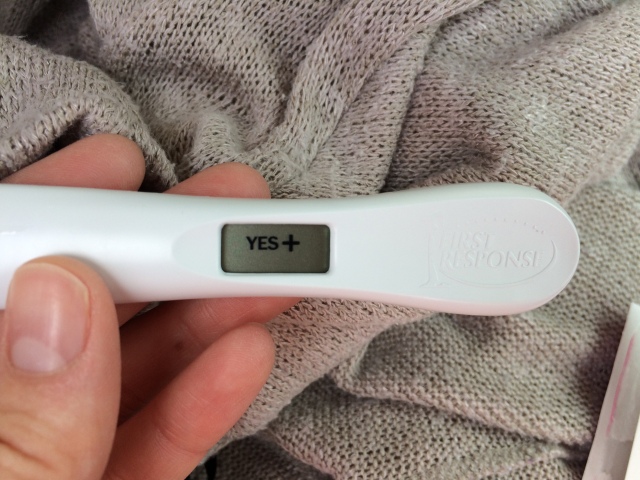 I will never forget the moment I discovered I was pregnant. I was getting ready for work one morning, and felt a little off. My husband and I were trying to conceive, and I was doubtful since it was our first month of trying but I felt different so I thought it wouldn’t hurt to check. I took the test, set it on the counter and continued getting ready for work. When I came back to brush my teeth, I glanced at the test expecting a negative. The most faint line stared back at me. I was in disbelief, excited and scared. Those are a lot of emotions to have right before going to work. I went to work and the pregnancy played through my mind all day. Was it true? Was I really blessed with this pregnancy? Would I really be a mother?

My job, ironically, is an early childhood educator in the infant program. I work with young children on a daily basis. My focus was definitely not in play that day. As I tried to rock one of the babies to sleep in the crib, I couldn’t help fantasizing about this perfect little being that my husband and I were about to be responsible for. I took every great personality trait the babies I worked with possessed and formed this fantasy about how my baby would be the one to sleep through the night, eat all the foods, be sociable and independent. I confirmed my pregnancy with a digital test in a Walmart bathroom on a lunch break (biggest change of my life!) and headed off to Indigo books to find the perfect little onesie to surprise my husband with.

Flash forward to January 2017. I was heavily pregnant, in pain, doing physiotherapy because my pregnancy had taken such a toll on my legs and hips. I had passed my due date. I was barely dilated, and the OB said my daughter would  likely need to be induced. The appointment was on the Friday, and I was scheduled to be induced on the Saturday the 28th. My husband and I went out for our last supper as a married couple without children. We went to bed, and I worried about the induction until I fell into a restless sleep.

At 3:13 am, I stood up beside our bed to go to the bathroom and BAM my water broke all over my brand new floor. My daughter was coming with a vengeance on her own terms. That should’ve been my first clue as to how my daughter’s personality was going to be. When she was born at 7:50 pm, she came out with an angry cry. She was mad. Very mad. I’m sure if she could’ve crawled back up to where the doctors pulled her from she would’ve. She was very upset and even holding, consoling and talking to her barely worked. She never let me put her down in the hospital. She hated the bassinet. I had her in the bed with me at the hospital so I could get some sleep. My poor husband was fast asleep on the uncomfortable couch chair he was provided and I was just in awe of what we had created. I was too excited to sleep

My daughter cried. A lot. She cried when she was held. She cried when she wasn’t. She was frustrated with breastfeeding (so was I).  She was a very angry person. Immediately I started feeling guilt. Why couldn’t I breastfeed properly? Why wasn’t she sleeping in the bassinet like those cute babies in the nursery on Grey’s Anatomy? My daughter was hours old and I was already feeling like a failure.

They say that God won’t give you more than you can handle. I was definitely tested with the child I was given. She rebeled against every stereotype. Different websites labeled her as a high maintenance child. I had different opinions about what I should do with her coming from all angles. I was told to try her on bottles to help her get away from the comfort nursing (ridiculous advice), I was told to give her rice cereal at three months old (the old ladies swear this trick works), I was told to let cry it out and guilted into forcing her to try to cry it out. It didn’t work.

This made me a firm believer in the tried and true practice of doing what works best for you and your child.

There are many small things that I was worried about when we had her and I realized that all of these fantasies I had about her being this perfect little being were just that – fantasies. As she gets older, we are seeing more and more of her personality shine through. She is a stubborn, sometimes difficult child, but I wouldn’t give that up for anything. She is my baby, my legacy, and I’m responsible for making her into a well rounded productive member of society. What did I do?